To continue to allow the Spirit of God to form us as a prayerful, Spirit-filled community serving the spiritual, social and educational needs of the people as a reconciling presence of the Lord Jesus Christ.

Our parish was established in May 1987 to alleviate crowded conditions in the parishes of southeast Orlando, to better accommodate growth in our area and to better serve the religious needs of the Catholics in Southeast Orange County. The vision for our parish was to become a center of worship and service, a community of care and outreach, a place to gather and to be the presence of Jesus Christ in our world.

The first pastor, Reverend Robert Hoeffner, bought a rectory building and set up a temporary office at Blessed Trinity Parish. In the spring of 1988, construction began on the Parish Hall. The first of the Parish’s facilities, the hall is approximately 13,250 square feet in size and is used for liturgy, meetings and classes. In the fall of 1996, construction began on the Parish Administration building. The building is approximately 6,300 square feet in size and houses all administrative functions, as well as providing conference rooms, work space for volunteer groups and a lunch room for the staff. Father Phillip Nuñez III, the Parochial Vicar, joined Reverend Hoeffner in 1997 and assisted in ministering to the needs of the Hispanic members of the Parish. St. Isaac Jogues Church is perhaps the most “multicultural” parish in the Diocese of Orlando consisting of about 55 percent Hispanic, mostly from Puerto Rico and Colombia, with Cubans, Dominicans and others sprinkled into the mix.

In the Summer of 1999, Father Robert Markunas became the new pastor at St. Isaac. In addition to his pastoral duties, he handled Catholic radio programming for the Hispanic population in the Orlando area. Father Ybain Ramirez replaced Father Phillip Nuñez, III as the new Parochial Vicar in August of 2001. During that time, extensive work was done in planning the construction of a new church for St. Isaac Jogues Parish. With the community growing, it was evident that a new worship environment was needed. Father Markunas kept the parish moving forward into the 21st century until he resignation as pastor of St. Isaac Jogues in September of 2003.

Father J. Fernando Gil, J.C.D. became our third Pastor in October of 2003. Shortly after, Bishop Norbert Dorsey along with Father Gil and founding pastor Father Robert Hoeffner broke ground for the new church. Several years following, our parish grew its clergy from three ordained Deacons to seven. Father Andrew Wojtan was brought in as the new Parochial Vicar after Father Ramirez was transferred to another parish. As the community of St. Isaac Jogues has grown closer to God the Father, the Son and the Holy Spirit, it has also grown outward to over 3000 families. On May 14, 2005 at 6:00 p.m., a new chapter of the life of St. Isaac Jogues Catholic Community began with the Rite of Dedication of the new church building. Most Rev. Thomas G. Wenski, the new Bishop of Orlando at the time, was the principal celebrant for this amazing celebration. With the dedication, our parish opened our new church exactly eighteen years after we were created by then Bishop Thomas Grady.

In the years after the parish opened the doors to our new church, we welcomed Fr. José Muñoz to St. Isaac Jogues as our new pastor. As we hit the 25th anniversary of our parish in May 2012, we count our many blessing, continue to grow as a parish community and grow closer to Christ. We now look toward the future and know that we have many great things, like a grade school, in store for us. We have grown greatly in the years since 1987. The increase is due directly to the ownership of the people, young and old, who want St. Isaac Jogues to continue as a vibrant Catholic force in our community. Our parish tries to be a community of good stewards through our need to give thanks for God’s many blessings by sharing a significant and sacrificial portion of your time, talents and treasures with the parish.

Who is St. Isaac Jogues? 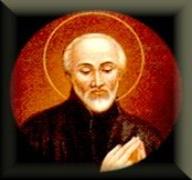 Born in the French city of Orléans in 1607, Isaac Jogues joined the Society of Jesus in 1624. After his ordination in 1636, he was sent, at his own request, to the missions of New France. With his fellow Jesuit Charles Raymbault, Jogues was one of the first Europeans to go as far inland as Sault Ste. Marie on Lake Superior.

In 1642, Isaac Jogues was captured, tortured, and mutilated by Mohawks. Jogues was later freed by Dutch traders and taken to New Amsterdam, which enabled him to return home to France to recuperate. He would be the first Catholic priest to visit the city that would one day be renamed New York.

Isaac Jogues returned to the missions in 1644. During the autumn of 1646, he was once again captured by a band of Mohawks and then martyred on October 18, 1646.